When I first heard (October 2016) that the Calgary Regional Partnership (CRP) had negotiated an agreement with SOUTHLAND Transportation Ltd and several communities south of Calgary to pilot a commuter transit service, I immediately thought, “wow this is forward thinking.”

As a member of the advisory board for the Richard Parker Professorship in Metropolitan Growth and Change, I am keenly aware of the importance of regional transit as part of any long-term strategic tourism and economic development initiatives.  Colleen Shepherd, the CRP’s Executive Director also sits on the advisory board and we have had numerous discussions about CRP’s leadership role in managing the growth of the Calgary region from different perspectives. 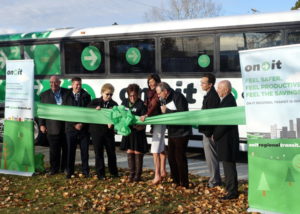 With much fanfare, Colleen Shepherd (brown jacket) and others launched On-It Regional Transit in October 2016.

I am a big fan of pilot projects vs. the “paralysis of analysis” that often happens in the public sector.  You can do numerous market studies, look at “best practices” in other cities and survey the public about what they want (or rather what they think they want) but eventually you have to test your vision in the real world.

To me, On-It’s two-year pilot was an appropriate timeframe to understand the demand, make adjustments, re-test the market and then make a decision regarding the current demand for a niche transit service for our region’s southern communities.

I was also pleased Southland Transportation was part of the On-It partnership, as they would bring a different “value for money” perspective to the pilot from the municipalities.

I also thought the CPR was wise to launch On-It with a comprehensive website, an on-line ticketing reservation system and luxury coaches giving the pilot every opportunity to succeed.

But wait, the CRP wasn’t done yet.

Their entrepreneurial and opportunistic spirit resulted in them teaming up with Parks Canada, and the towns of Banff, Canmore and Cochrane to offer a Calgary/Banff weekend transit service last summer.

The Calgary/Banff service turned out to be wildly successful (in part due to Canada 150’s free park admission) with sold out buses starting in the second week of operation and by the end of the summer several buses were sold out each day. 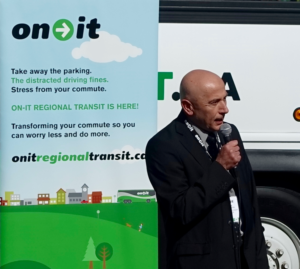 I was not surprised to learn the voluntary Calgary Regional Partnership made up of 11 municipalities in the Calgary region is winding down its operations, as it has been known for a while, that the Provincial Government was creating something called the Calgary Metropolitan Region Board (CMRB). What we didn’t know was what its mandate would be.

Turns out the CMRB will take on most – but not all – of the CRP’s roles and responsibilities for growth management in the Calgary region.

SOUTHLAND has agreed to:

In addition, SOUTHLAND will also be rebranding its direct to downtown Calgary service from Cochrane and Okotoks with the On-It brand and look for ways to merge all of its commuter services into a bigger and better integrated transit system for the Calgary Region. 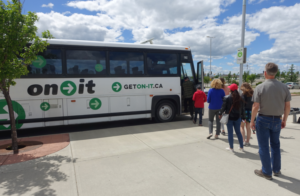 People all ages and backgrounds used On-It to get to Banff in the summer of 2017.

Calgary is unique in that it doesn’t have large satellite cities. In Calgary, 89% of the region’s 1.4 million people live within the City of Calgary.  The City of Vancouver represents only 26% of its regional population, City of Toronto 51% and the cities of Edmonton and Ottawa come in at 71% each.

The Calgary region has been the fastest growing metropolitan area in Canada for many years. 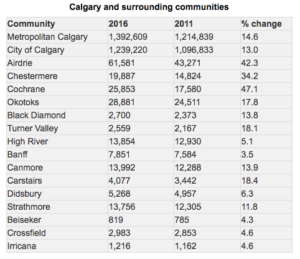 However, since 2011 Cochrane has had a population increased of 47% since 2011, Airdrie, 42% and Chestermere 34% means some of our satellite cities are growing significantly faster than the City of Calgary’s 13%.

The need for regional growth management is increasing every year, so now is the perfect time to be developing innovative projects like On-It.

In some way, Calgary’s LRT system functions like a regional transit system bringing people into the city from suburban communities which would be independent cities in many metropolitan areas.

It should be noted that both of the On-It pilot programs were integrated with Calgary Transit. The south pilot’s terminus in Calgary was the Somerset-Bridlewood LRT station so passengers could access both the LRT and connecting buses. Similarly, the Calgary/Banff service linked into Calgary’s LRT system at both the Crowfoot and Somerset-Bridlewood stations.

Having a regional transit system is critical to the recruitment of major corporation to locate in Calgary.  Amazon’s HQ2 bid document specifically requested detailed information on the applicant’s regional transit system as they recognized their employees would want a diversity of living options from urban to suburban, from small town to rural.

Creating a regional transit system is about enhancing the quality of life for everyone living in the Calgary region.  At 626,000 people Calgary was an early adopter of LRT, why not regional transit at 1.4 million. 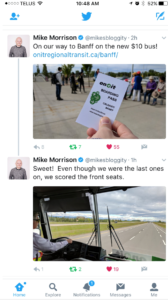 Mike was just one of the thousands of happy users who tweet out about how great it was to have weekend transit service to Banff and Canmore from Calgary.

While I am sad to learn the Calgary Regional Partnership will be no more, I can’t think of a more appropriate legacy for the 13-year voluntary partnership than the continuation of the “0n-It” brand as a memory of their forward thinking.

It will also be interesting to see how SOUTHLAND Transportation capitalizes on this opportunity to expand its role as a transportation leader in the Calgary Region.

It would be amazing if the private sector, rather than government were to successfully manage the next phase in the development of a regional transit system for Calgary.